When is Thanksgiving Day?

Date of Thanksgiving Day varies every year and several countries celebrate it in different time of the year. Given here is information on Thanksgiving Day date in US and Canada for the past, present and coming years.

When is Thanksgiving Day in USA?
Thanksgiving Day finds its roots in America. It is celebrated with lot of fervor and euphoria on the fourth Thursday in the month of November (in 2009 - November 26). For the people in US Thanksgiving is a time for merrymaking, shopping, family reunion, feasts and family dinners. People also take time to thank God for his constant grace and for all the material possessions man enjoys. For many Thanksgiving is also the time to thank near and dear ones and being grateful for their kindness.

Cornucopia
Cornucopia is the most common symbol of a harvest festival. A Horn shaped container, it is filled with abundance of the Earth’s harvest. It is also known as the ’horn of plenty’. The traditional cornucopia was a curved goat’s horn filled to brim with fruits and grains. According to Greek legend, Amalthea (a goat) broke one of her horns and offered it to Greek God Zeus as a sign of reverence. As a sign of gratitude, Zeus later set the goat’s image in the sky also known as constellation Capricorn.
Turkey
The celebration of Thanksgiving will be incomplete without the legendary Turkey. It derives its name from the ’turk turk’ sounds it makes when scared. Turkey was at one time being considered as the national symbol of America. Benjamin Franklin felt that turkey was the right choice because it was a good runner and had a sharp sight. A bald eagle later became the national symbol of America.
The famous ’Turkey’ adorns the table of every household as a main course during the celebration. The customary dinner reminds of the ’Four Wild Turkeys’ served at the ’First Thanksgiving Feast’. 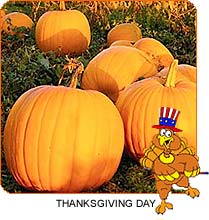 Pumpkin
Another modern staple at almost every Thanksgiving table is the customary ’Pumpkin Pie’. It is not sure whether pumpkin was one of the dishes in the first thanksgiving dinner. Pilgrims probably made a pumpkin dish sweetened with honey or syrup. They were however a part of all traditional meals long before the arrival of pilgrims. Pumpkin leaves were also used as salads. According to historians, other seasonal vegetables included squash. People at that time were not particularly fond of vegetables, they were mostly meat eaters. Pumpkin is one of the important symbols of the harvest festival and has been an American-favourite for over 400 years now.
¿Y esta publicidad? Puedes eliminarla si quieres.

Reading is an excellent way of learning new things. I'm glad you like it Naiara.