8.- THE BRAIN AND THE NERVOUS SYSTEM 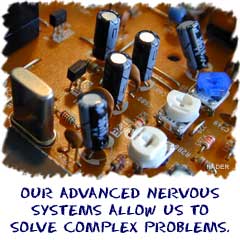 Since you’re reading this page, we figure you’ve got a nervous system. If you were an insect you would also have a nervous system, but it would be a lot simpler. Even animals that don’t think have simple nervous systems called nerve nets that help them move.

WHAT DOES THIS SYSTEM DO?

The nervous system is about action and senses. Animals are able to sense what is going on in their surroundings and do something in reaction to that input. If you see a bike that might hit you, you jump out of the way. In that example, your nervous system was involved in many ways. Your eyes saw the bike, your brain figured out the bike might hit you, and your brain told your muscles to make your legs jump out of the way. You sensed and then acted. 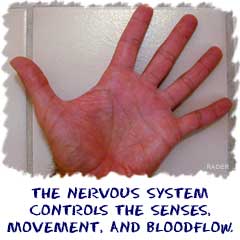 INTERACTING WITH OTHER SYSTEMS

There are many hidden interactions going on within your body. Your endocrine system works closely with your brain and central nervous system to control the creation of specific hormones and enzymes. Your digestive and excretory systems work with the nervous system in both conscious and unconscious ways. While digestion goes on without your thoughts, eating, peeing, and pooping are under your control.

PARTS OF THE SYSTEM 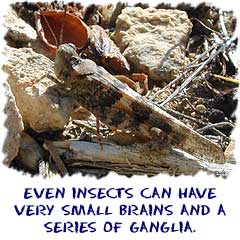 The nervous system is made up of nervous tissues that are, in turn, made up of many types of neurons. There are billions of neurons connected throughout your body. These neurons are connected end to end and transmit electrical impulses from one point to another.