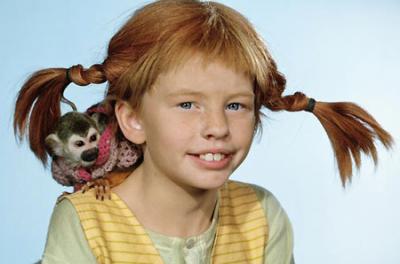 Pippi Långstrump is a fictional character in a series of children’s books by Swedish author Astrid Lindgren, and adapted into multiple films and television series. Pippi was named by Lindgren’s then nine-year-old daughter, Karin, who requested a get-well story from her mother one day when she was home sick from school.

Nine-year-old Pippi is unconventional, assertive, and has superhuman strength, being able to lift her horse one-handed without difficulty. She frequently mocks and dupes adults she encounters, an attitude likely to appeal to young readers; however, Pippi usually reserves her worst behavior for the most pompous and condescending of adults. She turns white around the nose whenever she gets angry, and considering her superhuman strength, this fortunately happens very rarely. Pippi’s anger is reserved for the most extreme cases, such as when a man ill-treats his horse. And like Peter Pan, Pippi does not want to grow up.

After an initial rejection from Bonnier Publishers in 1944, Lindgren’s manuscript was accepted for publication by the Swedish publisher Rabén and Sjögren. The first three Pippi chapter books were published from 1945 to 1948, with an additional series of six books published in 1969–1975. Two final stories were printed in 1979 and 2000. The books have been translated into 64 languages.

In 1968, the Swedish-German T.V. series that narrated the adventures of the redhead girl, started to be recorded. A movie had already been done 20 years earlier, in 1949 but Astrid Lindgren, the creator of the character, did not like it and she committed herself with the new project, and together with the director Olle Hellbom they would select Inger Nilsson for the role of her life.