RESPIRATORY SYSTEM - ALL ABOUT BREATHING

WHAT DOES THIS SYSTEM DO?

Animals need oxygen (O) to survive. In fact, all organisms need oxygen to complete the process to burning glucose for fuel. Even protists and plants need oxygen, but as you become more active, you need a lot of oxygen. That’s where your respiratory system comes in.

It’s purpose is to bring oxygen into your body. One of the products of cellular respiration is carbon dioxide. Your respiratory system also helps your body get rid of that carbon dioxide. While you have lungs, fish have gills that serve as the location for that transfer of gases. Whatever animal you study, oxygen is taken in and carbon dioxide let out.

INTERACTING WITH OTHER SYSTEMS

Although it does not happen in all animals, your respiratory system also interacts with your digestive system. Your mouth and pharynx are both used to swallow and to breathe. There is a branching point where you will find the epiglottis that directs food to your stomach and air to your lungs. Your respiratory system even connects with the nervous system in your nose where you smell. 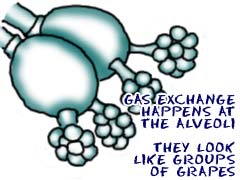 What can go wrong with your respiratory system? So many things can go wrong with this system. It is very vulnerable to both toxins and diseases. Some diseases such as pneumonia can cause your lungs to fill with fluid and you are no longer able to take in enough oxygen for your body.

Smokers can have a build up of tar and clog the alveoli in the lungs and decrease the amount of oxygen your body can take in. An extreme disease called emphysema actually destroys the tissues in your lungs and the tissue can never be regenerated. Individuals that get emphysema are often forced to breathe pure oxygen to survive.